"Oh, yes, there are two varieties on this side of the Limpopo. The chief difference between them is that the one kind of leopard has got a few more spots on it than the other kind. But when you meet a leopard in the veld, unexpectedly, you seldom trouble to count his spots to find out which kind he belongs to. That is unnecessary. Because, whatever kind of leopard it is that you come across in this way, you only do one kind of running. And that is the fastest kind." - Oom Schalk Lourens

It is our duty to push our limits in life. First we crawl, then we learn to eat with our own spoon, and finally we learn to drive with one hand while talking on our mobile phone. And remember no matter what you do you are judged regardless. Ghandi was judged for doing nothing, passively sitting around. Even inanimate objects will judge you as it was with the Blou Bruggie.

The Blou Bruggie is a hang bridge between Silverton where the high school is located and the suburb of Meyerspark in Pretoria. This bridge hangs there, day in day out, waiting for the hordes of school children twice a day. The bridge hangs high, straight and tight on its cables, and in contrast, next to this bridge there is a concrete path that drops suddenly down to the tiny stream below and then rise up steep on the other side. 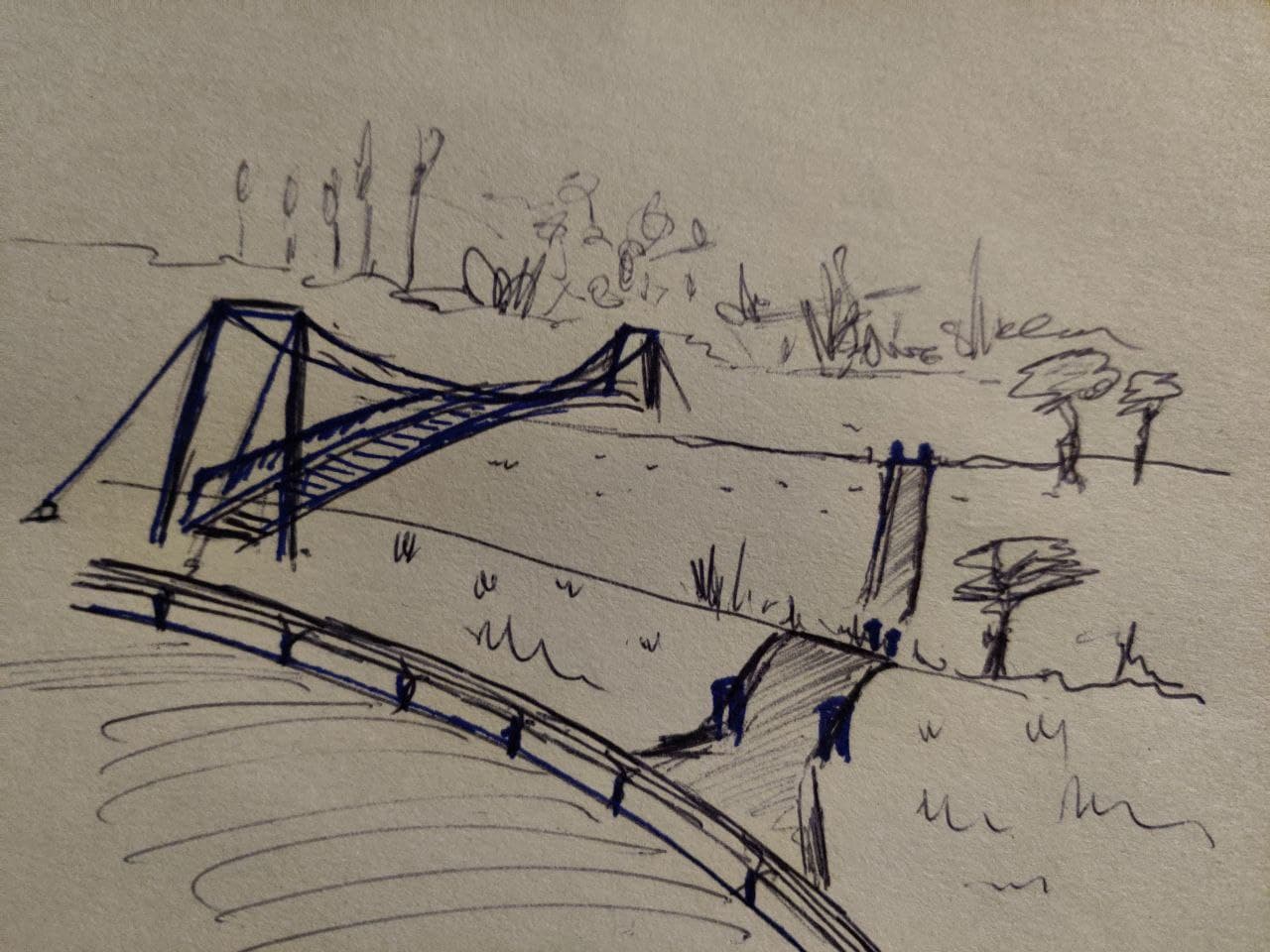 The girls use the bridge and the boys provide the show below on the concrete path. The boys will start gathering speed on their dikwiel bicycles, on the long down hills to the bruggie, when they are three blocks away. When you get to the top of the little concrete roller coaster ride you suddenly drop altitude like a peregrine falcon. When you reach the lowest point you have to zigzag some steel barriers. If you manage that and you have enough speed you can free up the other side without pedalling. Here is the clincher. If anything goes wrong with your zigzag moves there is no big splash in the stream waiting for you because basically it is just some mud and rocks.

All young boys do it. It's not showing off to the girls because testosterone hasn't kicked in yet. In fact some older boys that fancy a girl will WALK TO SCHOOL with the girl. Unbelievable!

So the blou bruggie carries the girls across and judge the boys performances. It gets interesting in the afternoon going back from school in the opposite direction. All the new young high school boys would race down to the blue bridge, but coming from the north you are confronted with a foot high pavement to get onto the concrete path. So then you have to stop, get over the obstacle and then cycle like hell, do the zigzag, and pedal to get up on the other side.

I have a vague idea when I first saw someone bunnyhop that pavement and cruise through to the other side. I remember many jumps where the timing was misjudged which results in somersaults all the way down to the muddy stream.

(draft - to be continued)